DAY RIDE TO WHEELS THROUGH TIME

On Thursday, June 4, 2015 we joined up with friends from the Time Warp Tea Room to take a day trip to Wheels Through Time Motorcycle Museum in Maggie Valley, NC.

We left our home in North Knoxville at 8:00am.

Jeff kicks off our day in this short video:

Everyone met up at the Weigel’s next to Lowes on Chapman Highway.

From left to right: David, James, Peanut, and Richard

After all our group arrived (a total of eight bikes), Richard led the ride. We headed south on Chapman Highway then took Whites School Road into the backside of Pigeon Forge.

From Pigeon Forge, we took the Gatlinburg bypass and stopped at the Sugarlands Visitor Center for a short break.

We then headed up 441 going over the mountain. Our next stop was at Newfound Gap.

The gang seems to be enjoying the break. 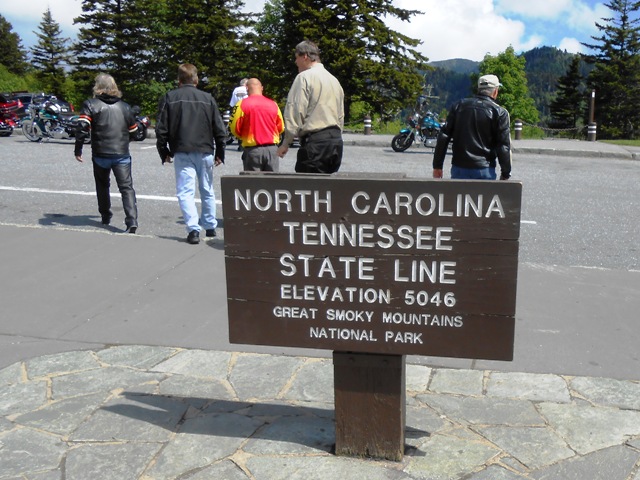 Newfound Gap is a mountain pass situated along the border between Tennessee and North Carolina.

Look at that view! 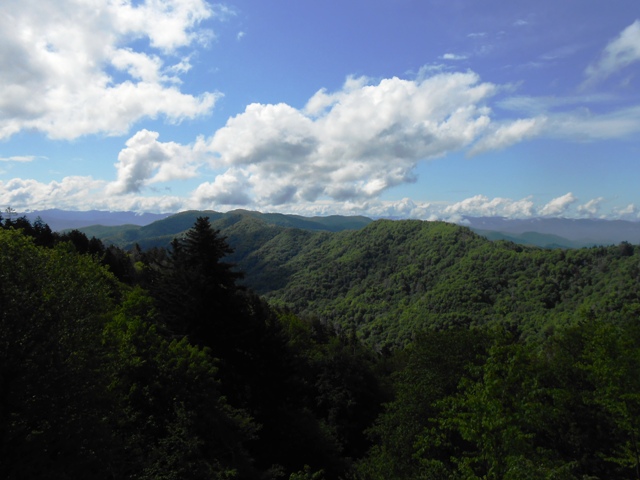 And another. It’s easy to see why so many people stop at Newfound Gap.

The guys are telling stories.

We left Newfound Gap and continued our trek over the mountain. We then took a left onto the Blue Ridge Parkway. 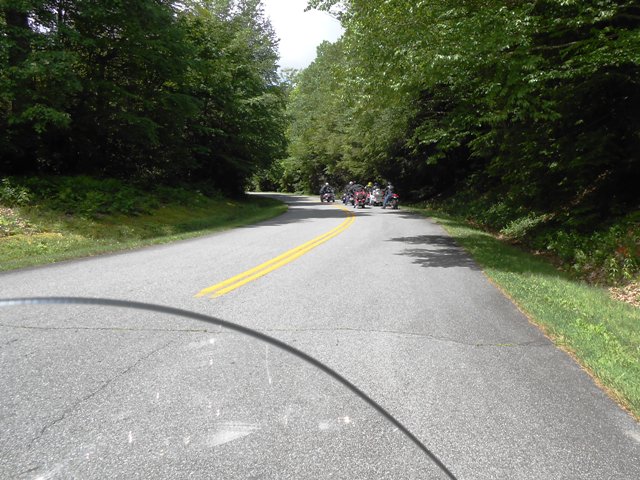 Here’s the gang about to exit the Blue Ridge Parkway heading toward Maggie Valley.

We arrive at Wheels Through Time around noon. The guys are anxious to get to the museum so we delay lunch until afterwards. 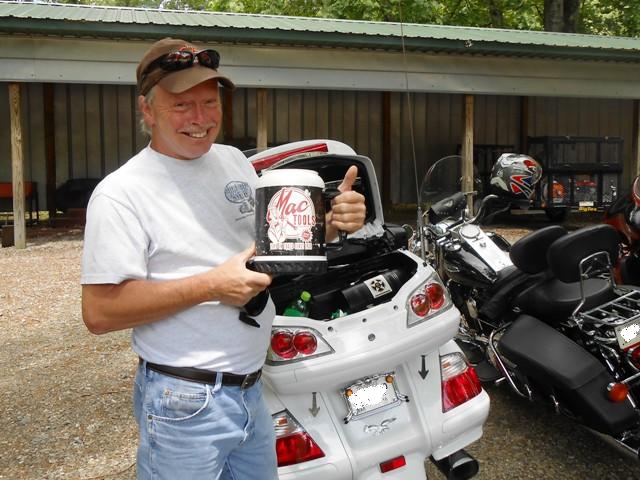 James hydrates before we hit the museum. Nice mug James! 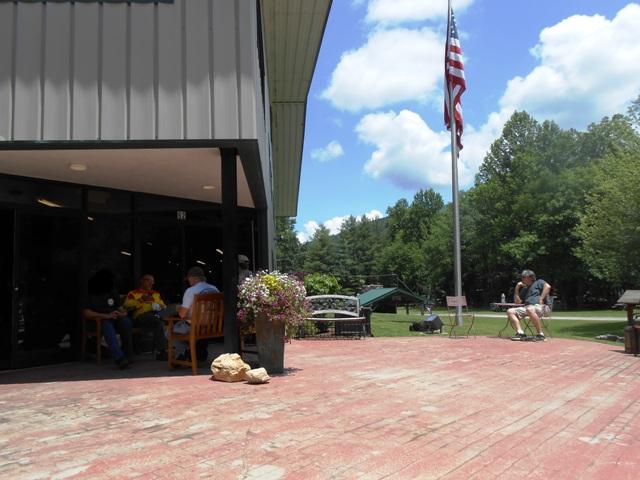 Here’s the entrance to the Wheels Through Time Museum. 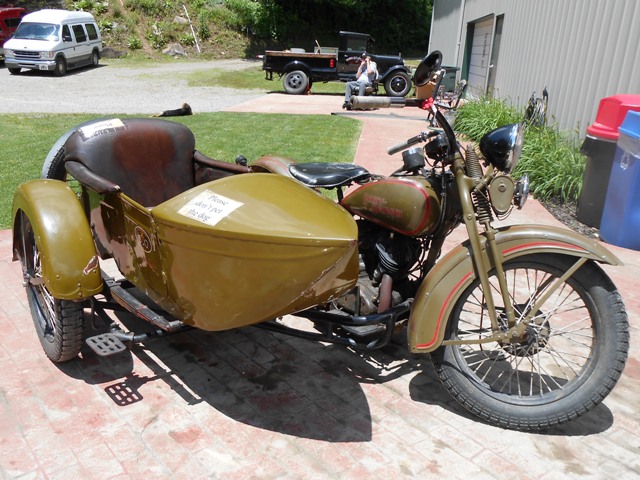 A cool vintage ride sits outside the museum. 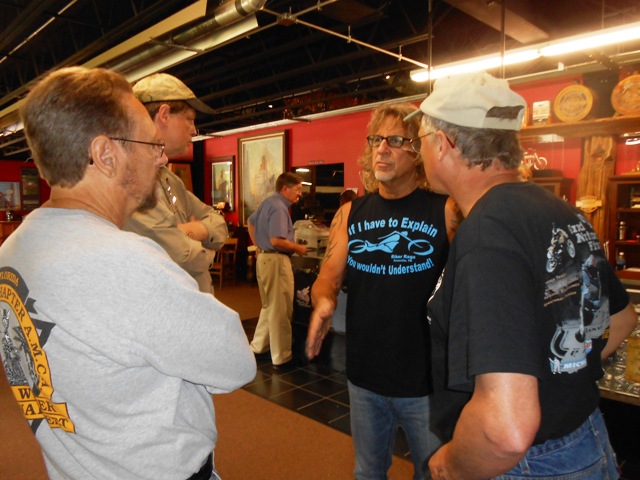 Here are the guys in the lobby getting ready to enter the museum. 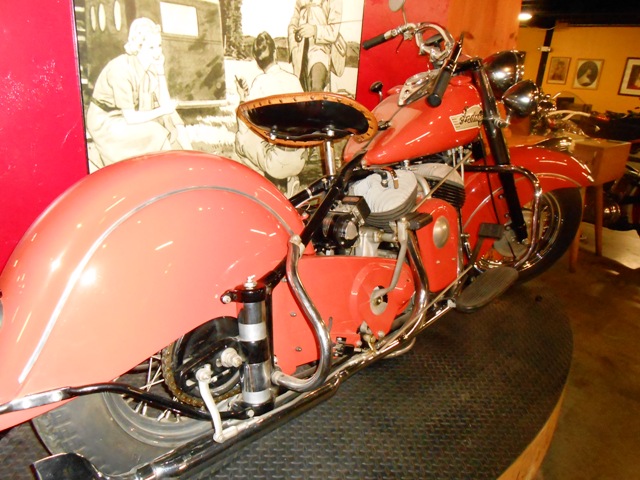 A beautiful Indian. Love the color. 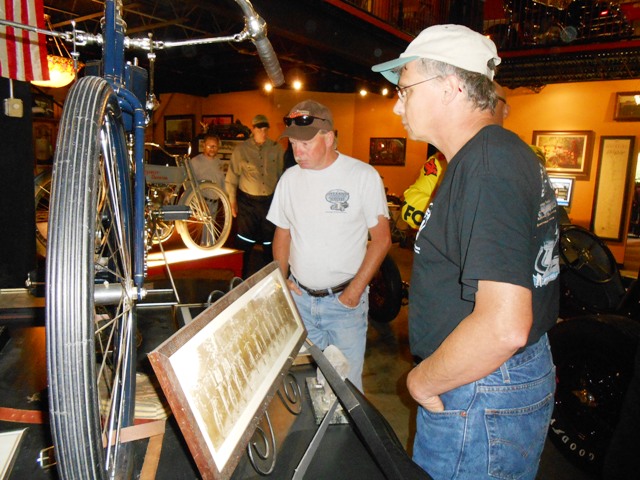 The guys love this stuff.

Dale purchased this car at auction in 2011 for $175,000. It’s future estimated value could be close to a million! (We have the auction video playing at Biker Rags.) 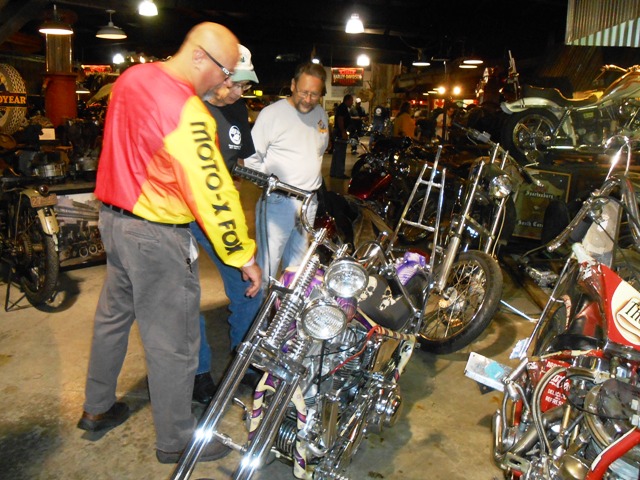 The guys get a kick out of the old choppers. 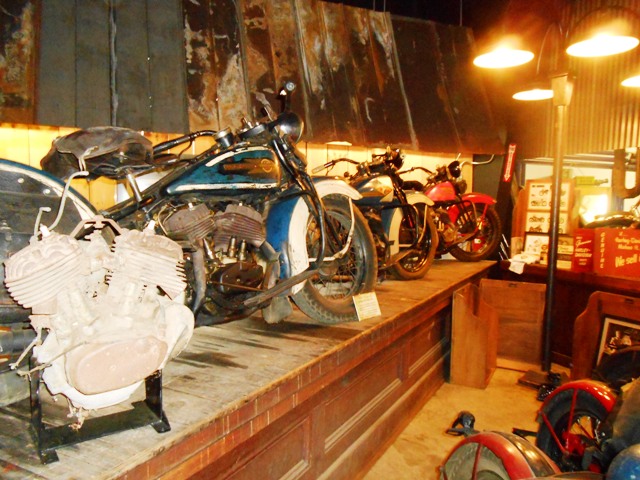 The museum is over flowing with antique machines.

Engines are everywhere at Wheels Through Time.

Big Fish. Wonder what year this one was customized?

How many times do you get to see an antique board track racer in person? 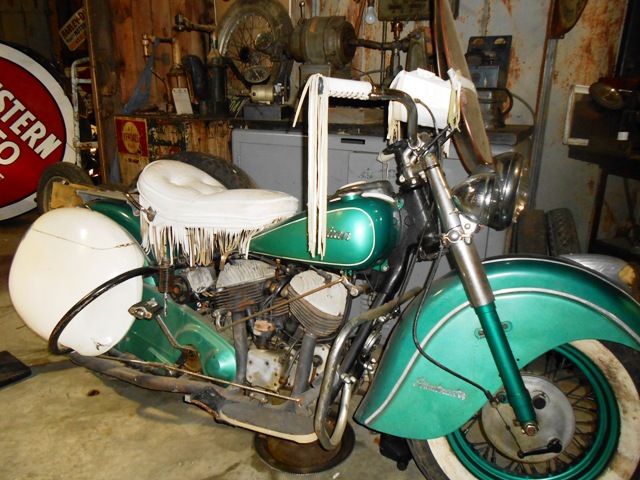 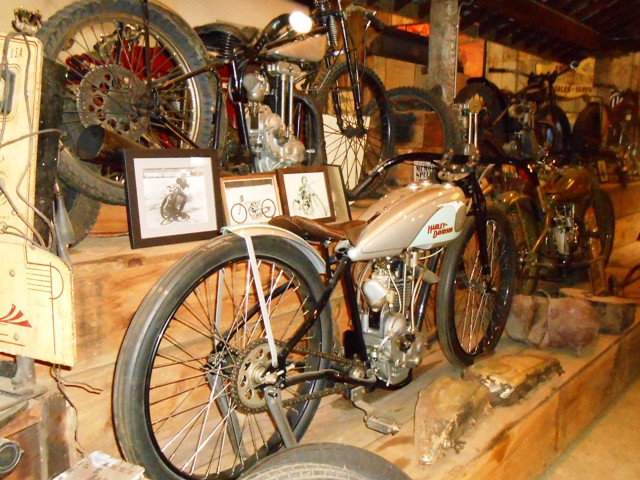 The bikes just go on and on and on….

This one was found inside a wall in Illinois. Wow! 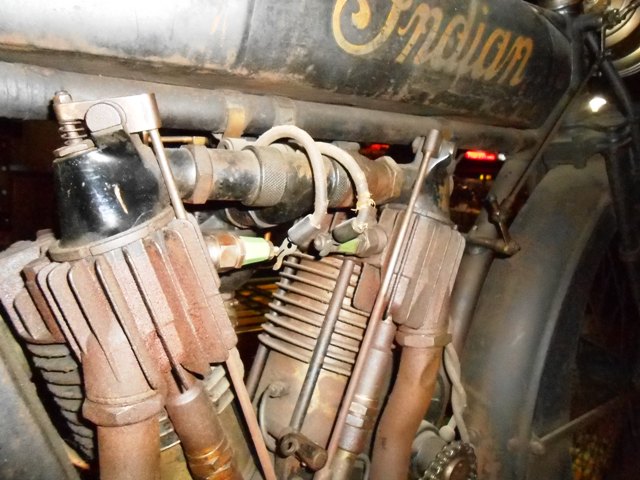 The museum is full of rare items you’ll never see anywhere else.

Enthusiasts appreciate the unmolested beauty of these machines. This is one of the first Indian’s ever made!

Peanut and Jeff love the color scheme on this Knucklehead.

Here’s a view from the second floor. From here you can see about twenty percent of the floor space. 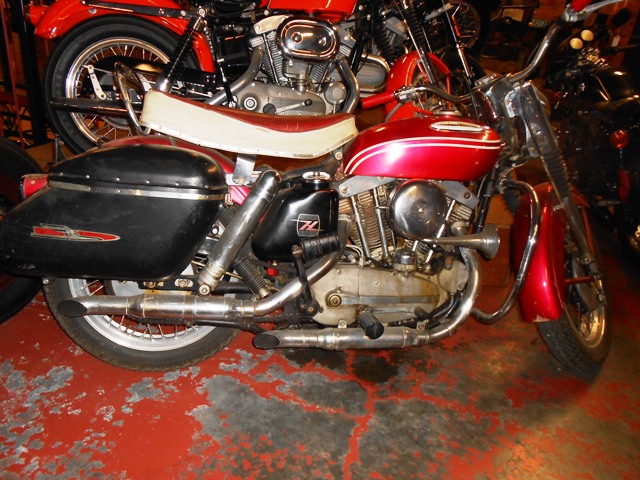 Evil Knievel’s machine. Amazing how he jumped that motorcycle. 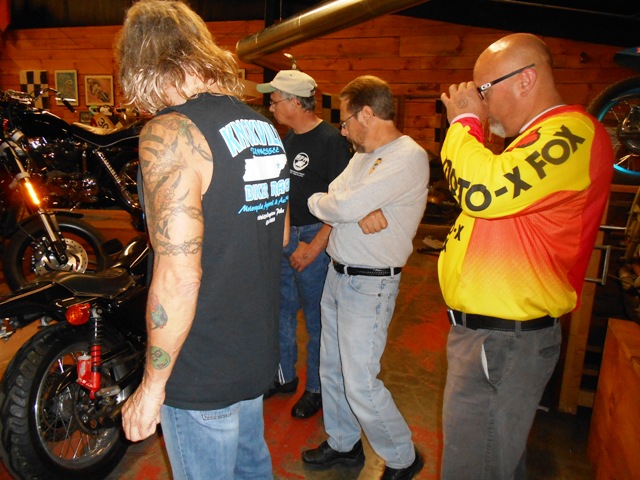 The boys have really enjoyed the museum.

By this time, we had spent a little over two hours inside the museum. We could have stayed another two hours and still not see everything. 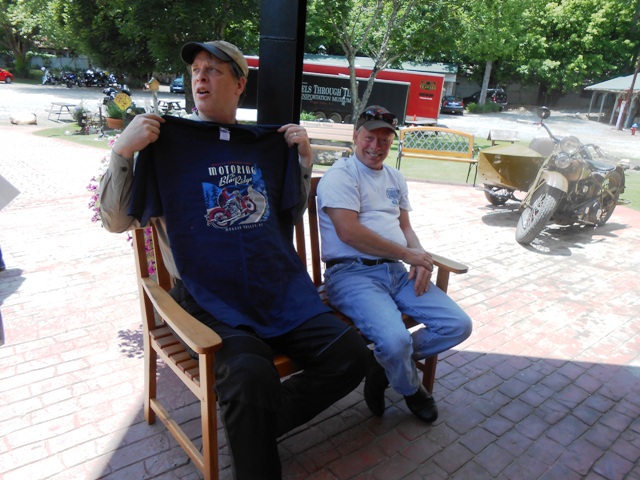 We got Richard a souvenir t-shirt for planning the day. Thank you Richard!

By the time we left the museum, it was about 2:30pm and we were ready to eat lunch. Just a few blocks from the museum is Country Vittles Family Style Restaurant.

You can’t miss it! It’s located just a few blocks from Wheels Through Time right on Soco Road.

Plenty of parking available for bikers. 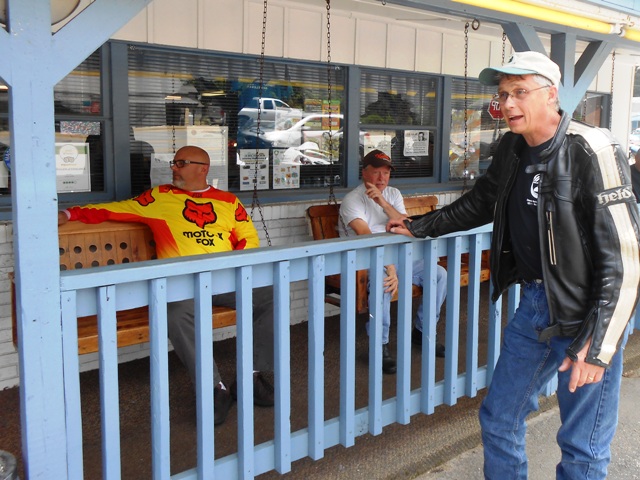 The guys test out the porch while David tells another tall one. 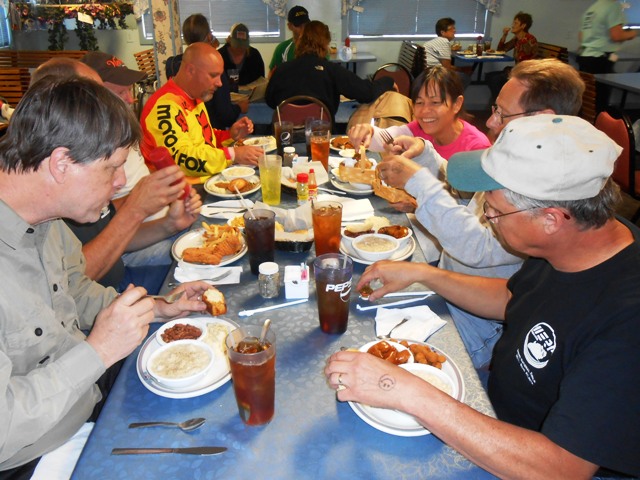 The service was friendly and fast and the food was spectacular!

Jeff and I got the chocolate cake too. Delicious!! 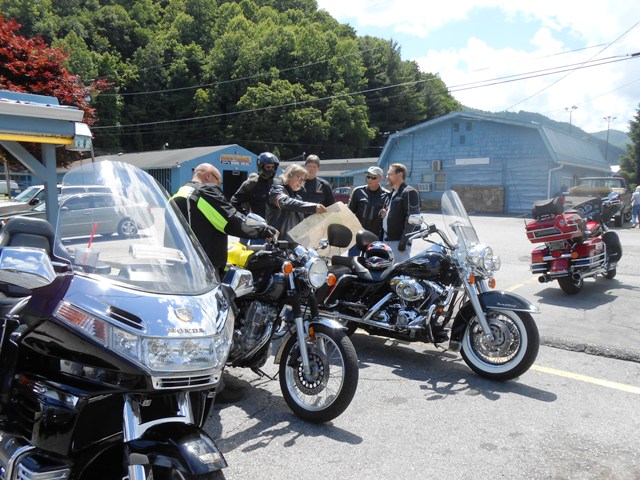 When the day started, we considered going another route back to Knoxville. But that route was longer and the group decided to return back over the mountain the way we came.

We stopped at Newfound Gap again going back over the mountain. 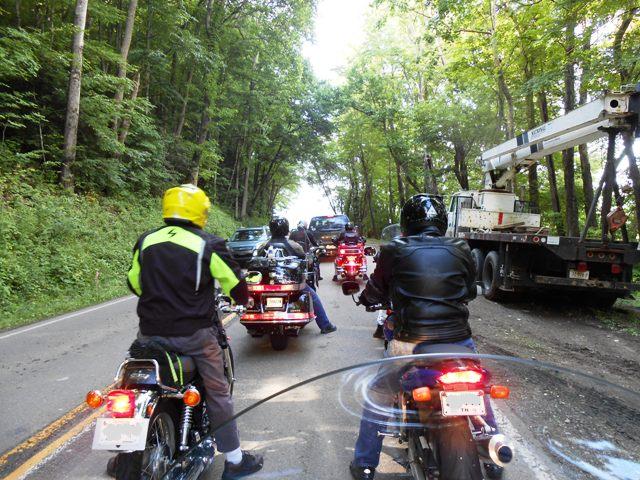 Here we are waiting on the road crews. Didn’t take too long. 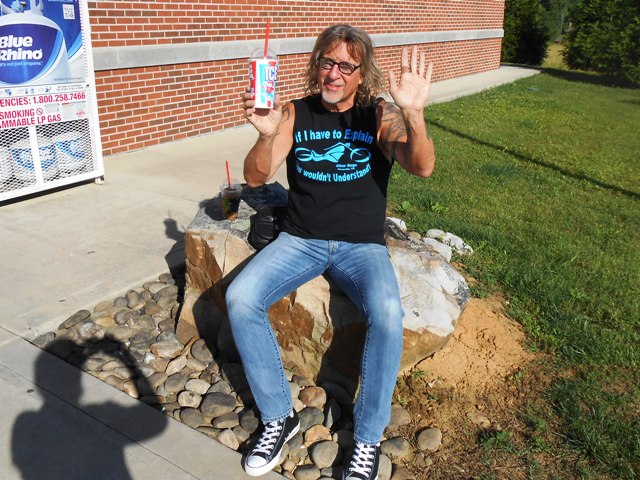 When we got back into Knoxville, Jeff and I stopped for an Icee at the same Weigel’s that our morning began.

We arrived home at 7pm and our total ride was 190 miles. Thank you Richard and all the guys from the Time Warp Tea Room for such a great day.